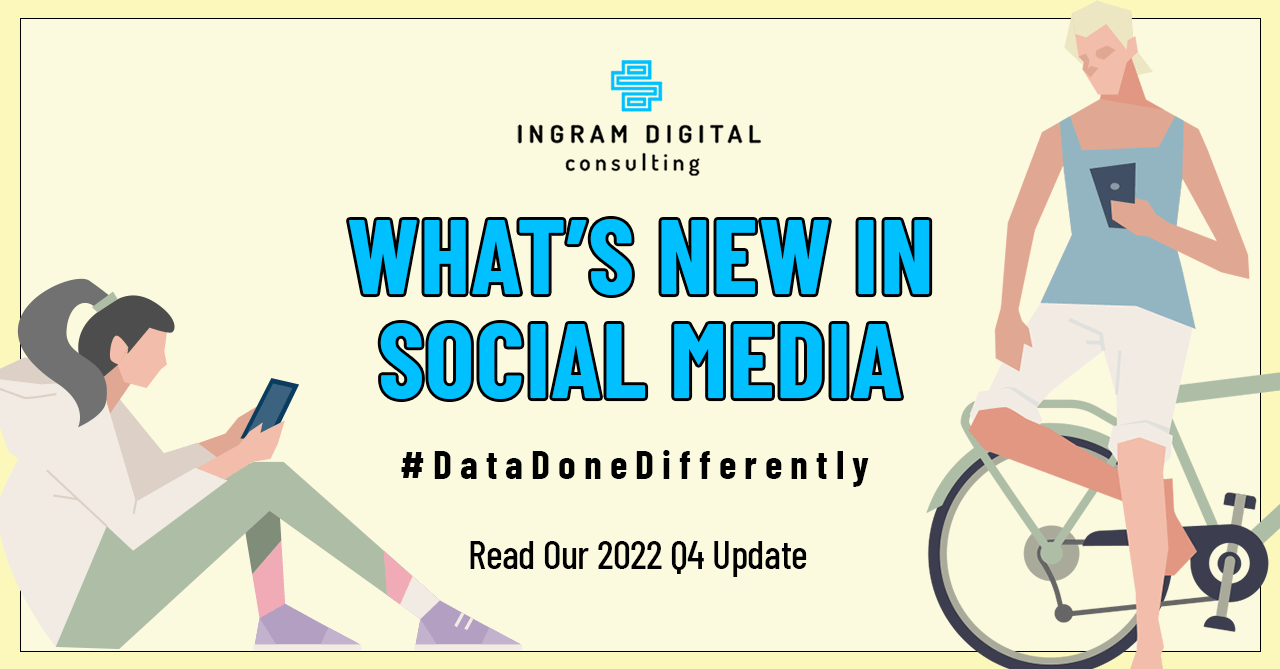 So what’s new in social media with the end of the year nearly upon us?

The short-form video battle between TikTok and Instagram is getting more aggressive. Brands continue to experience Meta challenges and pivot marketing strategies from the iOS update. The entrance of social media newcomer, BeReal, has drawn curiosity and attention from the platform heavy weights. And Google/YouTube seem to stay on the status-quo with no major updates recently. But before we dive too deep into my key takeaways from recent changes, let’s start with a quick numbers update (with reported usage stats from Global Web Index through the end of the second quarter.)

Have there been usage shifts in the most popular social media platforms?

Facebook remains king: Facebook still is the leader in overall daily usage with 75% of US users visiting it daily, and 26% ranking it as their favorite platform, far above any other platform.

Instagram remains firmly in the second position but TikTok is growing fast: 61% visit Instagram daily and 14% rank it as their favorite platform but TikTok is gaining ground. In 2021, 40% of users logged into TikTok daily but that climbed to 46% so far this year, the largest growth of any platform during that time.

Twitter has been leapfrogged: TikTok has officially moved ahead of Twitter for the third spot because of their recent surge. Twitter isn’t declining in usage (42%), which has remained the same over the last six months, it’s just not growing at the pace of TikTok right now.

Male-centric Reddit jumps in usage: the long-form content platform has seen very positive growth largely from Gen-Z this year. The platform grew from 26% to 30% daily usage, which is now dead even with LinkedIn in daily usage. Snapchat, Pinterest, and LinkedIn remain the same in overall usage from last year.

Instagram needs to stay true to who they are, a platform about self-expression through curation, and build products and features to stay and remain ahead. Otherwise, you'll be reacting to TikTok, and eventually behind them.

What’s heating up in the video battle between TikTok and Instagram?

While Instagram’s popularity and usage remain solid, there are very real concerns about their future. TikTok is putting them in a full court press right now. The TikTok growth is clear but there are a few key ways that are standing out to me that makes TikTok a legit challenger.

The algorithm and its recommendations are just better. Many users claim more accurate matching to the content they are looking for and the ease of finding the content they want. Instagram is in react mode to this obvious advantage and has yet to come up with a fix. One of the key problems that plague them is the motivations behind Instagram users to check in with people they know in how they use their feed and stories vs. people they don’t. TikTok is designed to find, follow, and interact with video content from people you don’t know while Instagram is trying to blend between both. For more about TikTok, download our TikTok Marketing Playbook here.

The copycatting strategy is a dangerous game. Copycatting has always been a competitive strategy from social platforms. Instagram copycatted Snapchat to create Stories. TikTok just copied BeReal (which we’ll get into more below), and so on and so on. The problem is you are not innovating based on what’s unique about you, you are just re-creating somebody else’s product. You're operating from a reaction mode instead of setting the new trends, technology, and innovation authentic to your platform. Instagram has gotten away from their core proposition by trying to be everything to everyone and in doing so, is in danger of TikTok being a better video platform for many Creators and users.

Who is BeReal and why should the social media heavy weights care?

BeReal has burst onto the social media scene recently. Their app prompts users once per day to snap and share a quick photo from wherever they happen to be. The app uses your phone’s front and rear cameras simultaneously, resulting in a post that overlays a candid selfie on an image of whatever’s in front of you. What’s its sweet spot? It has created a social media experience that prioritizes spontaneous connections over curation. We’re continuing to see many platforms navigating between the connections they make from people they know, and interactions with Creators, influencers, and brands that they don’t. How can you make it more personal and authentic with people you’ve never met?

The platform has gained so much recent buzz that TikTok has now created a copycat version called TikTok Now, announced mid-September. And soon enough, Instagram will have its own version too, which is in the works. BeReal doesn’t even have a monetization strategy yet but what is clear is the platform incumbents are scared of the next TikTok.

Why are brands still reeling from the iOS update and what does it mean?

In the wake of the iOS update released in 2021, brands are still trying to figure out what the right social media channel mix is both organically and paid. There is no one right answer for every brand but the increase in costs and decline in impressions from previous benchmarks makes the strategic decisions harder. Social media strategy will always come down to your goals and the audience you are trying to reach but Facebook still boasts by far the largest social media audience and the most mature platform. Brands have had to re-set expectations and do more realistic social media planning but it's still a platform you need to prioritize because your audience is there.

The need to be agile and flexible has never been more important - create social media strategies that can adapt to new social media environments and are not dependent on one single platform or tactic. Diversification is the name of the game.

Join our e-community and we’ll let you know when new blogs and resources drop.

As true data nerds, we love what we do — that’s our 'secret sauce.' There's nothing more satisfying than uncovering the latest trends, compelling factoids, and most progressive paths to distilling and using the petabytes of data available. Want to learn more?
Fill out the form below for your FREE copy of our Quarterly Insights Report -- we'll also let you know by email when new versions drop so you can stay completely up-to-date.
Thank you! Your submission has been received!
Oops! Something went wrong while submitting the form.
close